skip to main | skip to sidebar

The anatomy of a breakup

Spencer and I went to see "The Breakup" this weekend. Wow, talk about bad marketing. All of the ads for this movie have marketed it as a romantic comedy. It isn't! It is a drama with a few comedic elements.

I've read several reviews of the movie, most unfavorable. The problem I see with these reviews is that they are critical of what the movie isn't, rather than seeing what the movie truly is. People expected the Wedding Crashers 2 and were unable to see past that reaction.

This movie is uncomfortable. Often. It is the most honest, straight forward depiction of a break up that I have ever seen. My heart broke for each of the characters, when they did things (albeit to the extreme) that my friends and I have done over and over to posion our own happiness.

As the movie began, I feared it would be just another male bashing, men can do no right and women can do no wrong movie. Instead, it showed how each party can contribute to the misunderstandings, game playing and bad timing that can lead to the end of a once promising relationship.

The actors were engaging. Vince Vaughn showed an intensity that I wouldn't have thought possible. And, although most of the movie takes place when they are in the midst of their breakup, an early montage of pictures during the opening credits was enough to convince me of the chemistry between Jennifer and Vince.

I can't unconditionally recomend the movie because of an excess of cursing and partial nudity. Yet, I am glad that we went to see it.

Posted by Tammy at 7:21 AM 4 comments Links to this post

1 Samuel 2:19 Moreover his mother made him a little coat, and brought it to him from year to year, when she came up with her husband to offer the yearly sacrifice.

So much depends
upon
a little
coat,
a tangible
proof
of a mother's
love.

"Thank you for the coat mother."
"I hope it fits." I spent all year measuring the other boys of the neighborhood, imagining how you must have grown. Are they feeding you enough? Can you grow to your full potential without a mother's care?"
"It always does." I know how much you care, what your sacrifice means.
"'Til next year my son."
"Til next year."

Posted by Tammy at 9:43 AM 2 comments Links to this post

Oh No! Not a Family Ward!

Only three weeks left until our big move to Texas! Am I excited, yes! Am I scared, yes! I mean, Texas, for goodness sake, I’m a California girl, what do I know about roping steers, high school football or the Alamo? However, this reminds me of the last time I was scared by a big change.

It was less than a year ago when Spencer and I were married. Wait- now you probably think I’m going to write about the fears I had going into marriage, but no, I’m talking about something even scarier. The family ward. This may not sound scary to you, but I had been in a singles ward for fifteen years, and since I had started when I was seventeen that was almost as long as I had been in a family ward.

I know that there are many who have problems with singles wards. They call them meat markets, marriage mills, complain about the high turnover or the difficulty in standing out. I never had these problems. From day one, I felt like I belonged. Well, that’s not exactly true. It did take about six weeks for anyone to remember my name, but I’m a pretty persistent individual and eventually they caught on. From that point, I did belong. I loved having the opportunity to hold positions of responsibility, making new friends almost weekly, and truth be told being able to party, party, party.

So, when I moved into a family ward, I was nervous to say the least. For the first time in many years, church felt new to me again. Here are the things that unnerved me:

1. There were old people there. I don’t mean people my parent’s age; I mean old people, the kind whose wrinkles look like a topographical map for death. Since I had been single for so long, I had become used to being one of the oldest people in the ward. I was the wise old sage that the young innocents turned to for advice. Now, in one Sunday, I had become a child again. That first Sunday, as I realized that the collective age of the women sitting next to me in Relief Society was greater than that of my entire Relief Society in the YSA ward, I felt very intimidated.

2. There were children there. Tons of children, jumping off their parents’ shoulders, taking nosedives into the pews, body surfing through the crowd, children of all sizes, shapes and degrees of stickiness. I was sure that I would never be able to focus on a sacrament meeeting talk again.

I had other, unnamed fears as well. It just felt so different.

Over time, my nervousness faded. I learned to treasure the valuable knowledge of the older women in the ward. Their stories of raising families, surviving trials, losing husbands and remaining faithful through it all, touched my heart. I learned to smile at the energy of the young ones, and that the extra effort required to focus on the talks, brings extra insight as well. Plus, with some talks, the distraction is a welcome one!

The transition wasn't always easy. Tasks and callings that should be simple and uncomplicated, are made difficult, tedious and time consuming. I think that some people treat their callings as jobs, and not as opportunities to bless others. I think that the spirit of the law is often lost in the letter of it.

Yet, the people are genuinely trying. They are imperfect, but loving, and I'm grateful for their efforts.

Posted by Tammy at 8:47 AM 0 comments Links to this post

Starving for the word

In the past few weeks, Gospel Doctrine has been difficult for me. I've sat in class each week, feeling my frustration mount. We have a very knowledgeable teacher, however, he seems more intent on getting through the lesson and explaining the historical background than discussing the doctrine in any depth or in discussing how this doctrine can apply to our lives. This may sound odd, but everytime we breeze past a point that I am dying to discuss, I have this feeling of being cheated.

This isn't the first unsatisfying Sunday School class I've ever attended, but it is the first time I've ever had these kinds of feelings about it. After pondering this for a while, I think I've finally come up with the reason why.

In the past, I've been fairly active with my personal scripture study. However, for the past year and a half, it has been almost nonexistent. I think that unsatisfying sunday school lessons didn't bother me before, because it wasn't my only source for gospel enrichment. What I didn't get from church, I got on my own. However, since I have let that study time slide, my only scriptual nourishment comes on Sunday. Basically, I am starving myself of the word all week, and when I come to church and find no meat for me, I feel teased and ultimately let down.

So the answer to my frustation is not better sunday school lessons. I am not the only person in the class, and perhaps other members have needs that are being satisfied by the way it is being taught. Instead, the answer is to rededicate myself to my personal study.

Posted by Tammy at 9:26 AM 0 comments Links to this post

1. Writing graffitti in my classroom is evil.
2. Stealing the mouse ball from one of my computers is evil.
3. Making fun of a mentally challenged student is evil.
4. Putting your gum between the pages of a reading book is evil.
5. Stealing my emergency candy from the bottom drawer of my desk when I have a substitute is evil.

Posted by Tammy at 7:53 AM 0 comments Links to this post 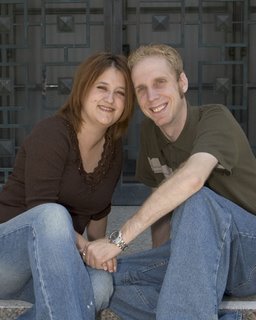 No, this isn't some philosophical post about my role in this world. I just though it might be a good idea to introduce myself.

I am a 33 year old recently (almost one year!) married woman. I grew up in California, graduated from BYU, served a mission in Minnesota, and in one month will be moving to Forney, Texas. I teach high school English, and hope to eventually get my masters in teaching reading.

My husband and I are avid game players, including board games and video games. Right now we are addicted to playing Brain Age on our DS.

Posted by Tammy at 11:10 AM 1 comments Links to this post

Do you hear the whispers?

I hear them. Whispers have surrounded me as long as I can remember. They sound like my parents, my friends, my enemies and my fears. They tell me I am wonderful, and special and worthy of greatness. They tell me I am horrible and stupid and worthy of ridicule. I'm not sure what this blog will be about exactly, but I do know that it will be a part of my neverending goal, to block out the whisperings of the world, and focus on the one that comes from God and proclaims "glory, and salvation, and honor, and immortality and eternal life; kingdoms, principalities, and powers!"

Posted by Tammy at 9:29 AM 0 comments Links to this post

More of my writing!


How to Videos & Articles: eHow.com